I go through a lot of felted sweaters. Like, A LOT. I scrounge for wool sweaters at the ARC or Goodwill at least once every week from September until March (which according to thrifts stores is sweater season). I felt and cut up sweaters once every month or so and organize all my pattern pieces so they are easy to grab and use. My goal at this point is to throw away as little of the sweater as possible, so I’ve had to get creative over the years. 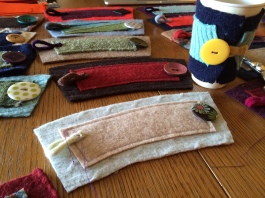 I started by only using sweaters to cut out patterns for my Coffee Cup Cozies. But there were all these parts left over. I began using the sleeves to make scarves, which helped ease my guilt, but I still felt like I was wasting some good scraps. I started looking online for small accessories I could create, and realized that hair clips were a worthy investment.

I found inspiration for the pattern I eventually made on the internet and at home.
After searching the web I found a few tutorials and photos that I really liked and tried to figure out why I liked them. For example, Here’s one that I liked because of the layering effect they used.

I also had a few hair clips at home that friends and family had bought me over the years that added to my inspiration and designs. Inspiration really is everywhere.

Because I was just using up scraps that I would have thrown away otherwise, I was keeping costs low and could therefore keep the price lower for customers. Also, I felt better about not throwing away so much good wool (because wool is getting harder and harder to come by as acrylic and acrylic blends take over the sweater market).

If you don’t use sweaters, you can still make hair clips or pins out of other scrap materials you have laying around. I also use a lot of t-shirts and end up with a lot of scraps from that and I’ve been thinking about making hair clips from those scraps as well. A lot of people have scraps from quilting or sewing projects, and those can be made into hair clips just as easily. Here’s a website with a bunch of great collection of hair bow ideas that you can make with your fabric, yarn, and ribbon scraps.

Here’s one of the first hair clips I ever made combined with the moment I realized how difficult it was to take photos of myself with an SLR camera. At least my hair looked fabulous.

Yes, you can let your hair down. Or you can put it up. It’s really up to you. But if you want a way to put it up (because it’s summer and it’s hot and if you have long hair you probably get that thing where your hair sticks to your forehead when you’re outside and it feels uncomfortable), there are a lot of options out there right now in the fashion world.

For one, headbands are coming back. I’m not sure if they ever actually left, but suddenly I’m seeing a lot more of them around here. I personally like the bigger, thicker headbands because otherwise they get lost in my hair (I always have more hair than I think I do…)

You can make your own headbands by cutting up t-shirts and braiding them in cool ways (I’ve seen this, but never figured it out myself because braids with more than three strands confuse me), by sewing some pretty fabric to some elastic, or by covering a pre-made headband of any size with fabric. Heck, you can even embellish a pre-made headband until it looks nothing like it’s original form. Here’s a website/blog post that gives you some ideas and some tutorials if you have creative energy and time to kill.

If you would prefer to buy a handmade headband, well then you’ve 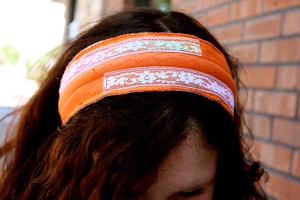 come to the right blog post! Plaidypus makes some lovely thick headbands from upcycled t-shirts. They come in many colors and textures and with many embellishments, and unlike many headbands, they don’t start to give you a headache after ten minutes of wearing them. Check them out in our Photo Gallery or on the Plaidypus Etsy Site. 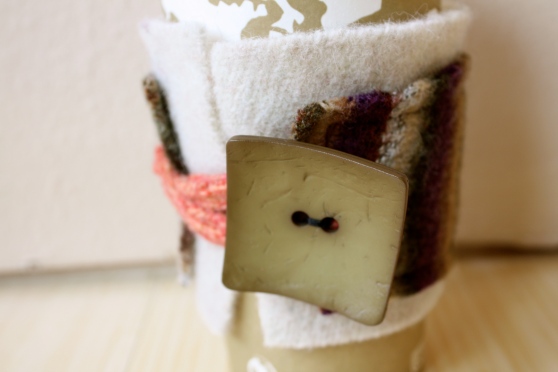 I know, I know, it’s summer and no one wants to be drinking scalding coffee, right? I thought that, too, until I realized that most people who drink coffee keep drinking coffee, even in the heat! Something about caffeine addiction or something.

Anyway, if you drink hot coffee, and you don’t want to touch the hot cup (because, let’s face it, you’re already consuming the stuff, so you may as well not double up on the heat), then why not try a coffee cup cozy? The ones I create are made of felted wool sweaters (the ugly ones, not the nice ones) and a pretty, big button.

If you’re local to Fort Collins, you can find these babies at Wadoo (in old town). If you live anywhere else, then feel free to order one on my etsy site! I can even try to do custom colors (assuming I can find the sweaters).