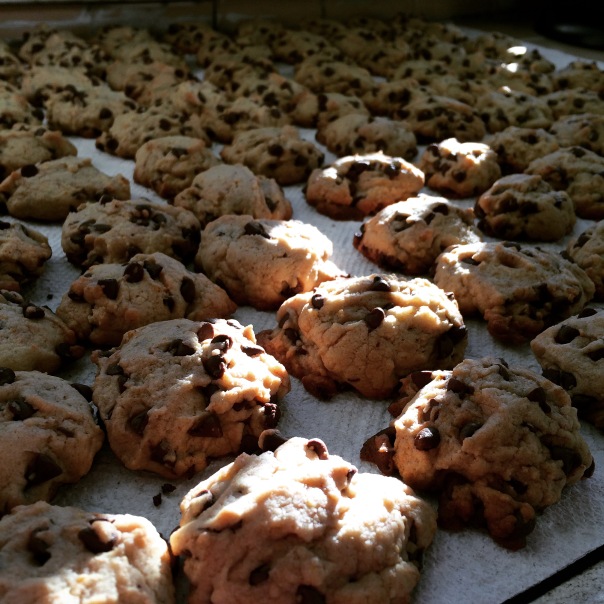 Now, I’m a firm believer in the classic chocolate chip cookie. But sometimes I want something a little different. But just a little different. Lo and behold, I find a recipe for my classic chocolate chip cookies, but with ORANGE in them. Orange has always been one of my favorite things they put in chocolate bars, so I tried it out. And then I had to make a second batch that same day because the first batch was almost gone already.

Be warned: you will eat these cookies like they are potato chips. So be prepared to either eat a lot of cookies in one sitting or give a bunch away (I always pack most of them up to give away, because that’s my lazy way of making friends or strengthening friendships.) 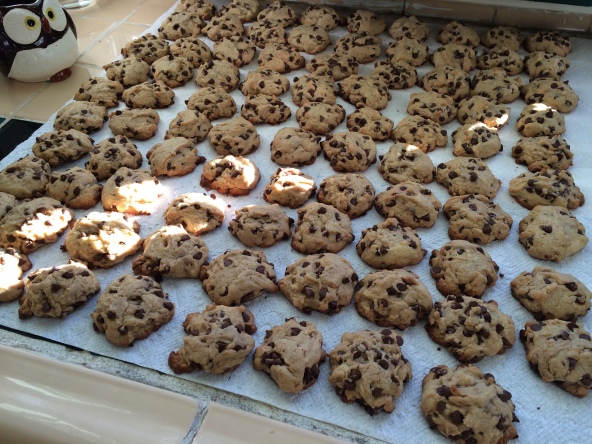 Bonus photo of my dog sitting patiently by the stove and hoping I will somehow drop the entire batch of cookies on the floor for him to clean up. 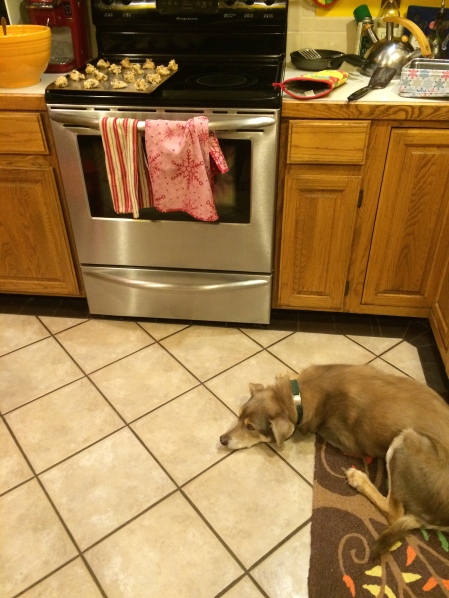 Saving the Planet with Snickerdoodles 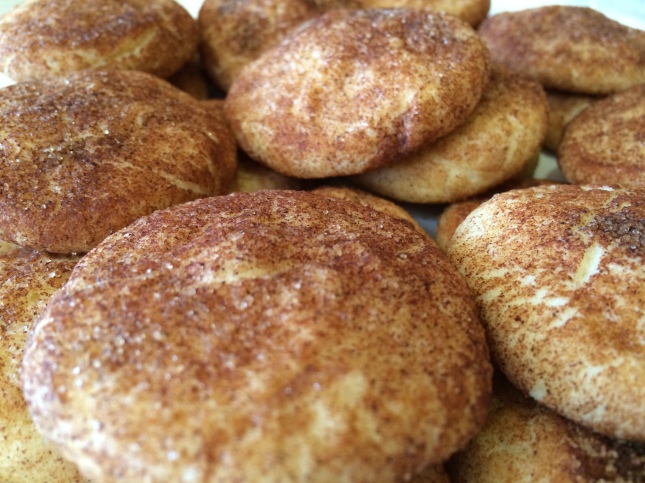 I’ve heard snickerdoodle cookies can go one way or the other. I have only made them maybe twice (this will be the third time). And they went the way I wanted them to go. Either I am a secret kitchen goddess or this is one fine recipe. It’s probably the latter. I baked these to use up the leftover topping from my Spiced Apple Pie Cupcakes (which I highly recommend making) . I figured I should recycle more often in my life and this was the perfect chance to help save the world. Basically I just tossed a lot of cinnamon (maybe 2 teaspoons worth?) into the mix and it suddenly became a snickerdoodle topping.
The real snickerdoodle topping is literally sugar and cinnamon, so a little extra flour and butter and spices wasn’t going to be so bad. And, spoilers, it was awesome. Here’s the actual cookie recipe, though.
Snickerdoodle Cookies
Ingredients:
1 cup butter
1 1/2 cups sugar
2 large eggs
2 3/4 cup flour
2 tsp cream of tartar
1/2 tsp baking powder
1/4 tsp salt
For the topping, if you aren’t, you know, using leftover apple spice cupcake topping plus cinnamon, I recommend about two tablespoons of sugar per two teaspoons of cinnamon (which is a 3:1 ratio in teaspoons, in case you need to keep adding more topping). But if you want it heavier or lighter on the cinnamon, it’s all up to you!
1. Preheat oven to 350
2. Mix butter, sugar, and eggs in a large bowl
3. Combine flour baking powder, and salt in a separate bowl and then fold into the wet ingredients.
4. Chill dough (I learned from a friend that that’s how they become softer and puffier. Otherwise they flatten out more than you want them to. Unless you like flatter cookies, then don’t chill). The recipe asked me to chill the baking sheet, but I didn’t because there is no room in my fridge or freezer for such a thing. You can do this if you want for 10-15 minutes.
5. Roll out about 1 inch balls of dough and roll them around in the topping mixture, then put on you (possibly chilled) baking sheet.
6. Bake for 10 minutes. 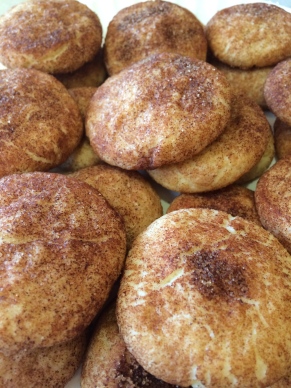 When you take them out remove them ASAP from the pan so they don’t keep cooking. That way they’re softer. Unless you like cookies crispy. Then do what you want.
7. Enjoy. The first time I used this recipe, I had never made snickerdoodles and had only had them a handful of times, so I was pleased with the outcome. They were soft and puffy. I didn’t have photos from the first time I made these when they were so perfect (because we were too busy hrowing flour at each other and watching youtube videos), but here’s how they turned out from this batch (I think they still look pretty delicious).
I figured I should add some recipes on this blog, because crafters and non-crafters alike require sustenance to keep going sometimes. And sometimes that sustenance is in the form of baked goods. So here’s my first contribution to your crafting fuel:
Spice Cake Muffins (or, how I made friends with baked goods)